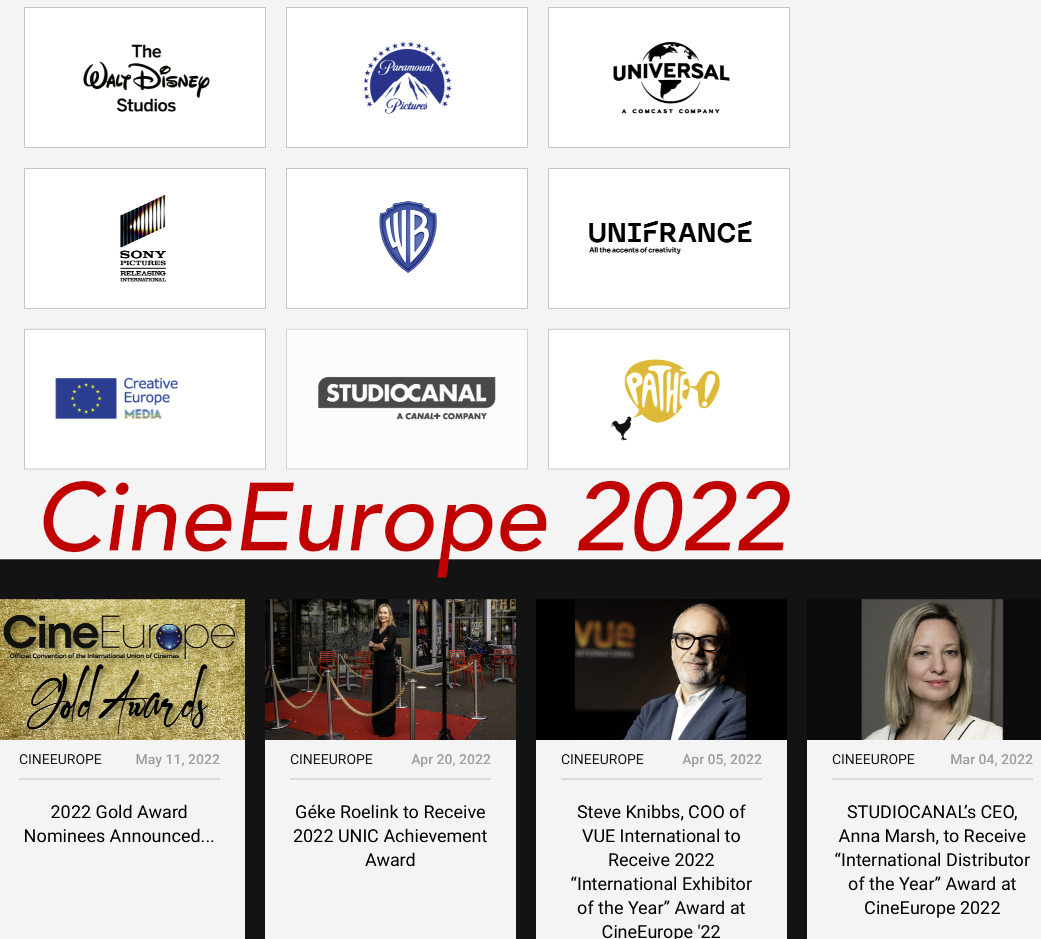 CineEurope 2022, Barcelona: 21 June 2022 – The International Union of Cinemas (UNIC), the trade association representing cinema operators and their national associations across 39 European territories, has today published its Annual Report on key cinema trends in the region in 2021/22.

The report – available online here – provides an in-depth look at recent trends and developments in the European cinema industry, one of the most diverse, innovative and dynamic in the World.

Having faced the unprecedented challenges of the COVID pandemic, 2021 saw cinemas across the globe move swiftly along the road to recovery. European cinema admissions increased by an estimated 36.4 per cent in 2021, with almost 590 million visits across the region. Box office reached €3.7 billion, an increase of 40.8 per cent on the previous year. At EU level – including the UK – close to 400 million tickets were sold in cinemas, worth an estimated €3.0 billion at the box office – an increase of 31.1 per cent and 38.4 per cent respectively. All this when most screens across the region were shut for the first six months of the year and operating for the remainder under limited occupancy and/or additional restrictions.

The relevance of local European releases was never clearer than during these challenging times, with countries such as
France (40.6 per cent), the
Czech Republic (38.3 per cent),
Serbia (37 per cent),
Denmark (37 per cent) and
Norway (28.1 per cent)
leading the way in terms of national films’ market share. In 2021, several European and International titles managed to break box office records at national and international level, all the more astonishing given their challenging release context.

The hugely impressive figures featured in the UNIC report – and the predictions for 2022 – provide ample demonstration of the resilience of the cinema sector, underpinned by the insatiable public appetite for the cinema-going experience. With the cinema industry now firmly set on the path of recovery, we are confident that it will get back to the record- breaking results of 2019.

“While the numbers shown here for 2021 are very positive, it remains the case that these remain challenging times for the European cinema sector. As a consequence, all industry stakeholders and policy-makers need to continue to pursue efforts aimed at ensuring the survival of local cinemas, whatever their size and location.

The only way to achieve this is to focus on ensuring both sustainability for all stakeholders in the value chain as well as the availability of films to the benefit of audiences.

2022 will be a pivotal year for the industry. UNIC members are confident that the cinema industry will come back stronger from this crisis, and that, as before, the audience will continue to enjoy films together, on the Big Screen.”

Many of the trends examined in the Annual Report will also be discussed during the week at CineEurope, UNIC’s official convention and Europe’s premier gathering of cinema exhibition professionals from the region and beyond.

The International Union of Cinemas (UNIC)

CineEurope 2022 is taking place 20-23 June at the Centre Convencions Internacional Barcelona (CCIB) in Barcelona, Spain. CineEurope is the longest running and most successful European convention and trade show for major, regional, and independent cinema professionals. CineEurope will feature exclusive screenings and product presentations of upcoming films, sponsored events, timely and informative seminars, and the CineEurope Trade Show. CineEurope is the Official Convention of the Union Internationale des Cinémas/International Union of Cinemas (UNIC).