Hey! Hi. This page is was duplicated at the Training Courses site, with new edits, at: What’s It Mean? Distortion?

Let’s do this again, go through a term that everybody uses but which has a different meaning depending on who you talk to. We care about the particular meaning that will correctly get an idea across to the Tech Team. We have to describe a problem so it can solved quickly and well.

Distortion – For our purpose, distortion is the term that describes the imperfect recreation of the original sound of the motion picture. There are other definitions and uses, including the use with picture details such as ‘brightness and contrast problems’ or ‘focus problems’ or different kinds of color and screen problems.

Sound problems can be detailed too – for example, ‘too loud!’, or ‘too soft in one area of the room or one set of frequencies, like the ‘bass being too low’ or ‘a rattle that occurs when a loud noise happens onscreen’. But for many sounds we cab just say it is ‘distorted’ and let the tech figure the exact cause.

Here is a sample of 3 bell sounds. The 2nd is purposely made jagged, and the 3rd imitates a blanket on the bell. Most people would call the 2nd one distorted, and the 3rd one muted.

Another difference between sound distortion and picture distortion is that we generally know what a face or pair of shoes should look. But we don’t know how the warp plasma-drive should sound when it is having problems, or how rich an orchestra is supposed to sound in the side speakers – maybe they are supposed to be lower on one side or the other.

We really don’t have a way to know if something is being played back correctly. Maybe the director wanted the sound to be “dark” or “jagged”. We in the cinema were not there for the recording or post production mix. But generally we can presume that gross cracking and ugly sounds are not right.

Here’s a speaker that tried too hard, broke apart, and will now sound horrible – gross cracking and ugly (if it makes sounds at all!) 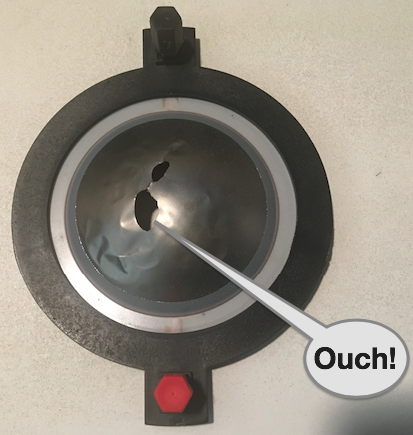 If you ask any sound mixer, they will say something like, “We mix the dialog so that it sounds like the natural level for the person speaking in the scene. Then we mix the music and sound effects around that so that everything can be heard.”

So, we know that if the dialog doesn’t sound natural and if it is coming from one of the side surround channels, that something is probably wrong – and should be reported.

What does it mean, ‘natural’?

That is a great question and the answer is amazingly simple and amazingly complex.

Human languages are incredibly complex. There are some parts of words that you can throw away and no one notices.

but there are some sounds that, if they go missing, the word doesn’t sound like a word – or maybe it could be one of 20 words.